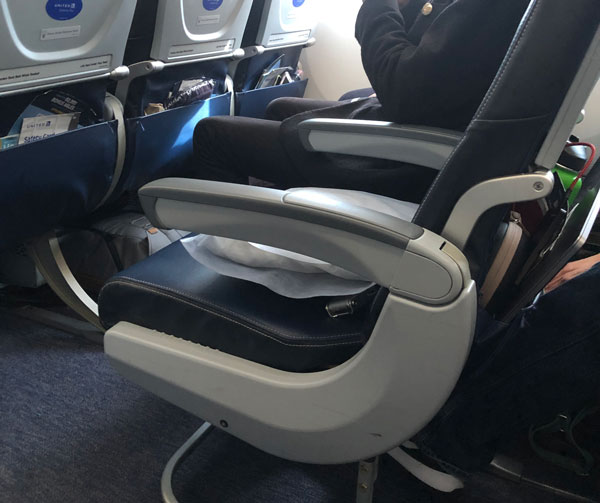 Recently we started an around the world trip from Sydney with United Airlines flying in their Economy Plus class to San Fransisco. Economy Plus is part of the economy class but with more space and closer to the front of the cabin. For around $120 extra you can enjoy more legroom and greater storage, but the meals and other amenities are still the same as economy.

The United Airlines gate at Sydney airport is very spacious as has lots of seating around it, which was handy because the plane was boarding in groups, group 1 and 2 (first and business) was first to board followed by 3 and 4 (premium economy and economy) being in economy meant I had to wait while the other groups boarded. Luckily there are some shops and convenience stores close by to browse while you wait, yet still close enough to hear when your group is called. Once boarding started it was very quick as everyone in the economy and the flight crew wanted to get the flight going! The Economy Plus cabin which was a 3-3-3 configuration was closer to the front of the plane, which made boarding quick and easy, the seat itself is the same as a normal economy seat, but the extra legroom is a plus. I was able to put my small carry on under the seat in front of me and still have a comfortable amount of legroom. This was the only difference between Economy Plus and economy, the seat width, entertainment screen and seat recline are all the same as economy. The personal entertainment screen was a bit on the smaller side but had a really good selection of movies and television shows including the latest new releases and some nostalgic movies, the only downside of the entertainment was that the same two ads played before each new movie or TV show, it was very repetitive and you could not skip through the ads. Below the screen was a USB port for charging your devices along with a power point between the seats (shared by the 2 passengers). 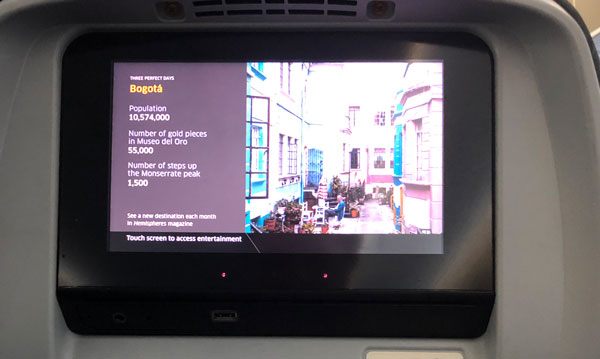 During the flight there were three meal services in the Economy Plus and economy cabins including dinner, inflight snack and breakfast. There was an option of chicken or pasta for dinner, I went with the chicken which was served with rice and beans along with a green salad and  a bread roll. Once dinner was cleared we where also offered ice cream for dessert, which finished off the meal nicely. The mid-flight snack included a choice of beverage along with a small roll and a chocolate biscuit. As this was served while most people were sleeping, the lights were not turned on the whole way to minimise disruption which we thought was a nice touch. About an hour and a half before landing the breakfast service began which included a choice between eggs and cereal. Both choices were served with a small fruit salad and a muffin. Overall the meal service was great and the air hosts were very helpful and attentive, particularly with offering water throughout the flight. This flight also had WiFi available for use while in the air. Once connected to the WiFi it was a bit hard to work out how to actually get it to work. In the end I had to ask the person sitting next to me who let me know that once you are connected you have to visit unitedwifi.com to purchase the connection (it was also in the inflight magazine but I missed it). The WiFi is available to be purchased by the hour. As this was a night flight I only purchased for an hour, however once connected I found the WiFi to be really responsive and quick to load and would recommend purchasing a longer package if you’re travelling on a day flight and would like to remain connected. Overall the flight to San Francisco with United Airlines was very comfortable and the extra space did make some difference to the economy. If you are comfortable in Economy the seat however the Economy Plus upgrade is not essential as the service and dining experience is the same in economy.