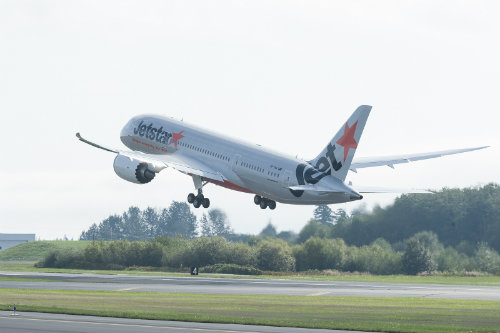 Due to a delay on the incoming service from Sydney, our flight home was delayed by 1.2 hours which gave me plenty of time to explore the airport. We had arrived at the airport 3 hours before departure as my travelling companion [my mother] is quite the cautious traveller, despite my advice that 2 hours is definitely adequate. There were only a couple of flights departing that early and Jetstar check-in was extremely efficient. There are an unusually high number of Starbucks at Honolulu Airport, so finding somewhere for a much needed coffee wasn’t a problem and there was one at every second gate.

Jetstar operates its A330 on its service through to Honolulu ex-Sydney, Melbourne and Brisbane. There’s a marked difference between Jetstar’s domestic flights compared to their international product, the seat pitch on the A330’s is 79cms which is on par with Qantas and SWISS’ economy class product and has a width of 44cm. All in all really comfortable seats for the 10.5 hour or so jaunt across the Pacific.

Jetstar’s A330 has a 2-4-2 configuration and unfortunately the plane was extremely full on the way back so we were stuck in the middle 4 seats. Not ideal if there’s just the two of you, as one person has to sit next to a stranger and have that awkward struggle for the shared armrest. The headrest is adjustable, you can make it lower or higher and adjust the sides comfortably around your head.

I purchased a few in flight extras for my flight as it was booked as a seat and bag only fare, I pre-ordered a hot meal, entertainment and comfort pack.  Hot meals are not available to buy on board, but they do a meal service where you can buy sandwiches or cheese and biscuits but nothing too substantial. So if you’re like me and need to be fed regularly, ordering a meal in advance is a great idea. There were some murmurings from passengers around me who didn’t know this had to be done in advance and as a result missed out, so definitely one to get onto once your tickets have been finalised. The breakfast was the same for everyone, a vegetarian breakfast wrap and for lunch you can either choose a standard meal or vegetarian, we were offered a choice of either chicken or lamb and the vegetarian was a spinach and ricotta pasta.

The entertainment was a Jetstar branded iPad, these are available to purchase on board if you forget or forget to charge your own iPad, but there are limited numbers so you have to get in quick. There was quite a good range of recent released movies, around 8 different options to choose from and several different TV shows in each category [drama, comedy, doco, etc] as well as magazines and games. There is also a children’s mode that you can turn on or off, once it is turned on you can only access the kids movies/books/tv shows/games so there’s no chance of the little ones accidentally watching something they shouldn’t be. Hot tip: instead of having your tray table down with the iPad resting on it, which reduces your leg space, you can hook the back of the iPad into the seat in front of you so that it looks like you have an in-seat TV and space to relax.

The comfort pack was made up of socks, blanket, neck pillow [inflatable] eye mask, toothbrush and toothpaste, ear plugs and moisturiser. Handy if you’ve forgotten to pack these things yourself and a nice add-on but I didn’t think it was a must have.

Flying long-haul with Jetstar was overall a very positive experience. Having pre-purchased the extra’s [$44 for meal, entertainment and comfort pack] it definitely didn’t have the low cost carrier feel and the on-board service was consistently attentive.

You can add a stopover in Hawaii most effectively on the Lufthansa around the world airfare. Ask us how!