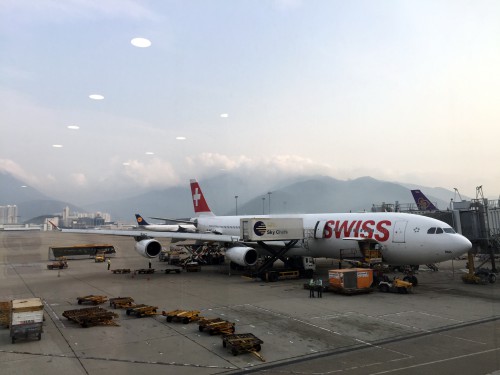 Flight One: Oslo – Zurich Economy Class
I arrived into Oslo Airport relatively early as I was connecting from Reykjavik and wanted to leave enough time between my flights, but more importantly there was only one flight that connected. Check-in opened spot on two hours before departure and SWISS’ ground crew were very friendly. They tagged my bags all the way through to Adelaide and printed my boarding passes, even though Cathay isn’t a Star Alliance airline nor a true interline carrier with SWISS. This was a pleasant surprise as I had anticipated having to pick up my boarding pass from the service counter in Hong Kong, which isn’t an issue but meant more time in duty free.

My flight from Oslo was scheduled to depart at 1925, and even though we got away a little late we made that time up in the air. Families with small children were given priority, then Business Class and finally boarding was open for all passengers. I was in economy for this leg so boarded in the middle lot of passengers going through, before I knew it the front door was closed and we were taxiing down the runway and up in the air.
Economy class seating was in a 2-2 configuration so nice to not have the middle person to jump over and it meant that there was ample space in the overhead compartment for both people to fit their belongings. The flight passed by quickly, lots of beautiful scenery to take advantage of from my window seat and the 2h20m flight. There was a snack service once we had reached altitude which was quiche and beverage of choice, I had a coffee. 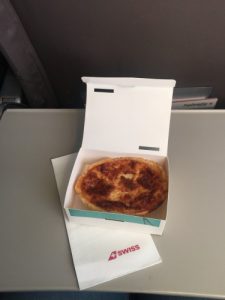 Transit through Zurich was a breeze. Passport control was not busy, it seemed like we were the only ones arriving at that time so we passed through in a matter of minutes. From there it was an easy and very well signed walk to catch the train to the next departure gate at satellite terminal E, in the non-Schengen area. With just 45 minutes between flights you might think it would be a rush, but we got to our next flight without any problem or sense of urgency. There is Wi-Fi all throughout Zurich terminal and a good selection of shops and cafes/bars to pass the time.

After a swift transit in Zurich we boarded for Hong Kong, I had seat 9D which is one of the centre pairs. As a solo traveller this was a big plus to be able to have unrestricted aisle access throughout the flight. As SWISS’ Business Class seats fold down into a 2m bed, there really isn’t any room to squeeze past if you’re in a window pair. Not at all an issue when travelling with another person but if you’re on your own, first choice would be a single seat followed by a centre pair. The cabin layout seems well designed in that it felt pretty spacious despite there being quite a few of us in there. SWISS’ Business cabin seats 47 passengers with a variety of single and double seat configurations. Singles are best followed by centre pairs but as a general rule on the A330’s, try to avoid seats 8A or 8K as they are missing a window. Also, you definitely want to try for rows 4 & 5 if you can. They are directly behind First Class, in front of the galley and bathrooms, and separate from the rest of Business Class, making it much cosier and more intimate, not to mention quieter.

After being seated and helped to put my carry-on in the overhead compartment I was offered a choice of newspapers and magazines followed by champagne or orange juice. The champagne was delicious. There are also bottles of water in your seat and the crew came round with bottled water a couple of times during the flight. The seat has an in-built massage function, power and a flexible reading light to name a few of the specs I used. I had issues with getting the power to work, I tried in vain for five minutes but one of the crew members spotted me having troubles and came over to help. He got it working in seconds, so definitely a case of user error rather than a problem with SWISS’ product. 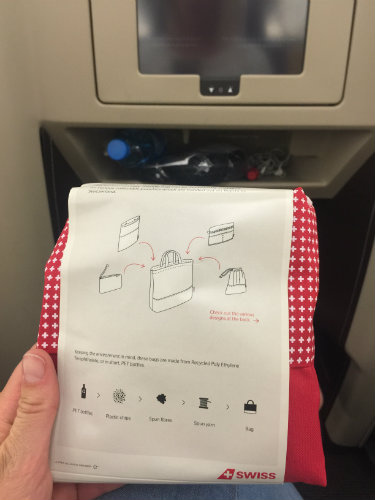 There is a good medium sized storage shelf under the TV, which is where I stored my water, lip gloss, noise cancelling headphones and amenity kit. As you have to have your belongings stowed for take-off and landing this is where I set myself up with my “in-flight necessities”. You also get a shelf where your menu is stored along with an inflight magazine, duty free and safety cards but not enough room to store anything more than perhaps another magazine or tablet. A pillow, blanket and amenity kit are waiting for you on your seat. My pillow was nice and firm and the blanket was nice and large. Supper was served once we were at altitude and hot towels were handed out immediately prior our meal. The crew had asked us what we wanted to order once we were seated so meal service was nice and quick once it started. Our supper was served in more of a restaurant, a la carte style rather than from a trolley which had a nice feel to it. I was personally served my entrée on a tray to my seat, and then there was another tray to serve my main although the original cutlery etc was the same but it was a nice touch. I didn’t have an entrée and just selected the chicken which was served with steamed broccoli and potato rosti. Once meal service was completed, I reclined my seat about half way and attempted to watch a movie. I found that SWISS’ TV screens were a bit small and a couple of people around me had some technical issues but the crew were excellent and either reset their TV’s or moved them into an empty seat. Keeping in mind that SWISS’ Business Class was fitted around 5-6  years ago now and the price point they offer, they are exceptional value for money and on an overnight flight to/from Asia where you’re really wanting to sleep the little tech issues are a very minor factor. Especially when ever second passenger has an iPad or if you’re travelling with your laptop on business it really is a small concern with the comfort factor, 2m long fully flat bed and bespoke SWISS’ menu and amenity kit being the major factors in why we continually choose SWISS as one of the best balances between price and product. 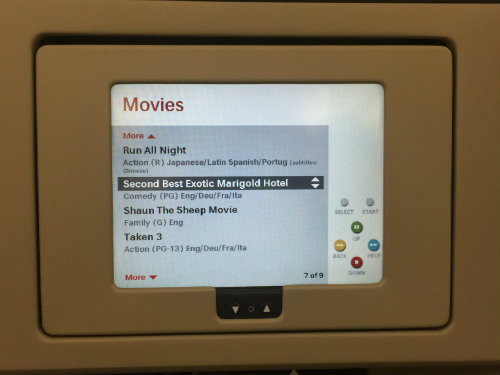 A really nice touch was being offered an espresso coffee for breakfast [genuine Nespresso no less] and then being offered a second! Breakfast was served in a buffet style with a selection of breads and croissants, meats and cheeses for entrée, followed by a choice of either omelette & sausage or Asian noodles. I chose the noodles and they tasted great, I always like to go with something a bit more local, especially on the way to/from Asia. Service was very prompt and attentive and offering me an Nespresso rather than just pouring a filtered coffee was a huge bonus. Once breakfast was cleared we began our descent with the crew coming around to assist storing bags and tidying the cabin for landing. We arrived on time and the taxi to our gate was uninterrupted. As I was transiting straight through on my way back to Adelaide I didn’t need to clear customs and immigration and there were lots of signs for passengers just transiting through. All up, my jaunt from Zurich – Hong Kong was very comfortable. I managed to squeeze in a few hours’ sleep but also got to experience SWISS’ key Business Class comforts. While there are definitely newer products on the market, like SWISS’ sister airline Lufthansa’s latest offering, SWISS gives you everything you need in Business Class and doesn’t hurt the hip pocket. Compared to flying with Singapore Airlines, Qatar or Etihad, who are fantastic but attract quite the premium, there is some room for improvement. However, we are eagerly awaiting SWISS’ new 777-300ER aircraft in 2016 now that the Lufthansa product has been rolled out, and in the interim the main benefit from Switzerland’s flagship airline is their very attractive price point for a fully flat product.

For more information on booking SWISS contact us via our online enquiry form.