Qantas was founded in Winton, Queensland and the name is an acronym for Queensland and Northern Territory Aerial Services.  The airline was founded in 1920 and expanded to include international flights in 1935 with a service from Darwin to Singapore.  Qantas, nicknamed ‘the Flying Kangaroo’ is Australia’s largest airline, the second oldest in the world, and a founding member of the oneworld alliance.

Qantas has operated a number of subsidiary airlines over the years and currently has Jetstar Airways operating as its low-cost carrier on both domestic and international routes.  Qantas flies to 21 international cities in fourteen countries across Africa, the Americas, Asia, Europe and Oceania.  In the entire Qantas group, including Jetstar, there are 65 domestic and 27 international destinations.  Qantas operates the world’s longest passenger flight, non-stop service from Sydney to Dallas aboard the Airbus A380, the world’s largest passenger aircraft.

Qantas’ fleet is made up of Boeing 737-800’s,  A380’s and a new fleet of Dreamliners introduced in 2018.  There are 12 Boeing 747’s currently in service that are gradually being retired and replaced by A380’s and Dreamliners.  Qantas and its subsidiaries operate 284 aircraft, which includes 70 aircraft by Jetstar Airways.

First Class is offered only on the Airbus A380.  It has fourteen individual suites in a 1-1-1 configuration.  The seats face forward for takeoff, but rotate to the side for dining and sleeping.  Seat pitch is 83 inches, extending to a fully flat bed, and with a width of 29 inches.  You’ll enjoy the Bedding Down service which includes pillows, blankets, a duvet and sheepskin mattress.  Each suite has a 17 inch widescreen with 1,000 AVOD programs. In addition to 110v AC power outlets, USB ports are offered for connectivity. Passengers are also able to make use of the on-board business lounge on the upper deck.  As well as the Amenities Kit featuring SK-II skincare products you will receive pyjamas, slippers and socks.  Upon arrival, you will be among the first to leave the aircraft and your bags among the first to be ready for collection.

Read our review of flying in First Class with Qantas.

Chauffeur Drive is available to all First Class passengers at a range of destinations.  If you are departing from Sydney or Melbourne a First Host will call you the day before your travel to ensure you have everything your require available in the First Lounge.  There’s a dedicated check-in area and you’ll be fast-tracked through immigration.  There will be a dedicated boarding lane at the aircraft gate for you. 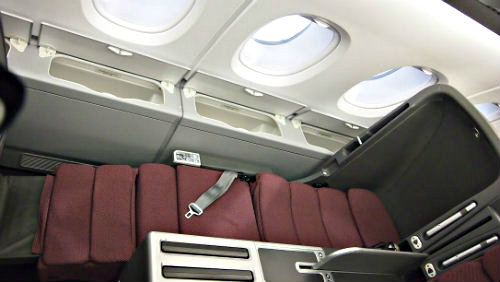 Premium Economy Class is available on the A380, Boeing 747-400’s, and Dreamliners.  It has a seat pitch of 38 inches on the Boeing 747 & it ranges from 38-42 inches on the Airbus A380, with a width of 19 inches. On the Boeing 747, it is configured in a 2-4-2 seating arrangement around the middle of the main deck, whilst it is in a 2-3-2 at the rear of the upper deck on the A380.  Seats have an adjustable headrest, the centre and side consoles offer extra elbow room and Premium Economy cabins are sized between 32 and 40 seats.  You’ll have a 10 inch personal entertainment screen and be provided with noise-cancelling headphones.  Passengers will be able to use the dedicated check-in desk at the airport and have priority access to a dedicated boarding lane, then on arrival have priority disembarkation.

To join the program, passengers pay a one-off joining fee, and then become a Bronze Frequent Flyer.  Accounts remain active as long as there is points activity once every eighteen months. Flights with Qantas and selected partner airlines earn Status Credits — and accumulation of these allows progression to Silver status (OneWorld Ruby), Gold status (OneWorld Sapphire), Platinum and Platinum One status (OneWorld Emerald).

The Qantas Club is the airline lounge for Qantas with airport locations around Australia and the world. The Qantas Club offers membership by paid subscription (one year, two years or four years) or by achievement of Gold or Platinum frequent flyer status. Benefits of membership include lounge access, priority check-in, priority luggage handling and increased luggage allowances.  Qantas has a flagship Lounge in Singapore, The Qantas Singapore Lounge which opened in 2013. This replaced the existing First and Business Class lounges as a result of the new Emirates Alliance. Qantas Club Members, Gold Frequent Flyers and OneWorld Sapphire holders are permitted to enter domestic Qantas Clubs when flying on Qantas or Jetstar flights along with one guest who need not be travelling. Platinum and OneWorld Emerald Members are permitted to bring in two guests who do not need to be travelling. Platinum Frequent Flyers had previously been able to access The Qantas Club in Australian domestic terminals at any time, regardless of whether they were flying that day.  Internationally, members use Qantas International Business Class lounges (or the OneWorld equivalent). Guests of the member must be travelling to gain access to international lounges.  When flying with American Airlines, members have access to Admirals Club lounges and when flying on British Airways, members have access to British Airways’ Terraces and Galleries Lounges.  Travellers holding OneWorld Sapphire or Emerald status are also allowed in Qantas Club lounges worldwide.