Inside The New Qantas Dreamliner

The first of Qantas’s 8 new Dreamliners touched down in Sydney last week. The first Dreamliner for the airline has been named Great Southern Land following a nationwide competition run earlier in the year.

The first Qantas Dreamliner route will be Melbourne – Los Angeles, with the new plane coming in to operation from December 15 2017. The second Dreamliner will be used on the ground breaking Perth- London route, the first non-stop service between Australia and Europe which will commence in March 2018. A further 4 Dreamliners will be based in Brisbane by the end of 2018, with new direct international routes to North America being hinted at by the airline.

Inside the Qantas Dreamliner

Dreamliners are lauded as game changing aircraft with larger windows, improved air filtration, and new mood lighting all designed to improve inflight comfort and reduce jetlag.  The addition to the Qantas fleet has been hotly anticipated. The new Qantas Dreamliner features the new generation seats in both economy and premium economy along with new business class suites.

Qantas Dreamliner Business Class
Known for providing a high level of privacy, the Qantas business class suites now more flexible with the addition of a moving divider between each seat.  The Suites also have a fully-flat bed and offer plenty of space to eat, work or relax.  Laid out in a 1-2-1 configuration for the much-coveted direct aisle access, they also have the unique ability to be reclined during take-off and landing. 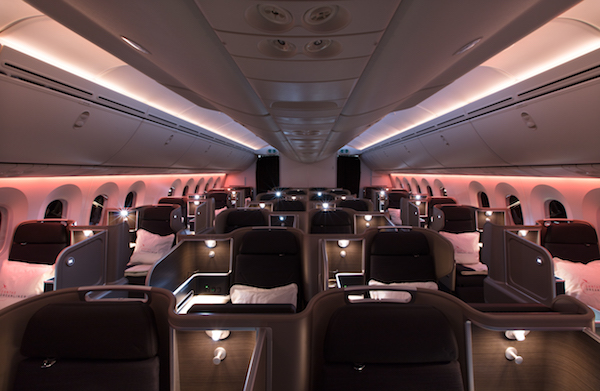 Qantas Dreamliner Premium Economy
Qantas is introducing their all new Premium Economy in the Dreamliner fleet. The new seat has a unique recline motion that moves various parts of the seat providing more body support and greater comfort. Premium Economy will be located in a cabin of its own with a 28 seats in a 2-3-2 formation. Size wise the seats really measure up, with 10% extra width compared to current Qantas Premium Economy (up to 22.8 inches), seat pitch of 38 inches, and 30% extra table size including a dedicated cocktail table. The seats come with an ergonomically designed headrest that hold a custom designed pillow and a re-engineered footrest providing better leg support. Also larger is the high definition Panasonic seat back screen, at 25% larger than the existing screens. Within the seat, passengers will have access to 5 storage compartments, 2 USB charging points per seat and shared AC power. Qantas Dreamliner Economy
The Dreamliner Economy cabin will also be fitted out with next generation seats. The new Economy seats will have an extra inch in pitch (compared to the airline’s A380 economy seats) and include a new personal device holder, USB ports, more storage areas, a high definition touch screen that is 5% larger, seat back mood lighting designed to create minimal disturbance, and an updated version of the Qantas ‘foot net’ designed to cradle the legs during slip. To book your round the world flights and experience the new Qantas Dreamliner contact our Airfare Consultants.