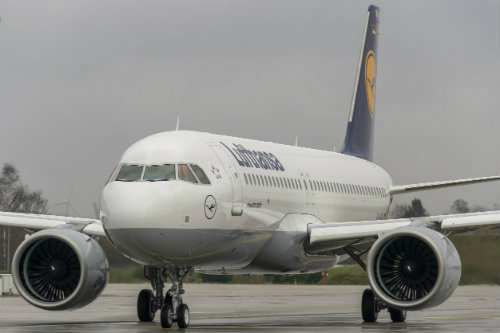 Big celebrations for Lufthansa and Airbus as they celebrate delivery of the very first Airbus A320neo into service, at an event attended by 700 invited guests and media representatives.

Reporting on the first A320neo (new engine option) flights clearly show that the 15% lower fuel consumption mark Airbus was aiming for has not only been achieved but even slightly exceeded.  This translates to extra revenue for Lufthansa as it means the aircraft can accommodate twelve more seats in the Business Class cabin.  The significantly quieter engines are also a plus in regard to customer comfort on-board and providing relief to residents near airports by reducing noise emissions.

The development and introduction of the quietest and most fuel-efficient aircraft on short and medium distances is further evidence of the successful cooperation in the aviation industry at European level. “Europe has been a leader in this fascinating industry since the early days of aviation,” says Carsten Spohr, Lufthansa’s chairman and CEO. “Lufthansa and Airbus have developed a trusting and productive forty-year partnership.  Together we have pushed ahead and brought to market many innovations and contributed to the success of the European aerospace industry. With new and efficient aircraft, such as the A320neo and the A350 XWB, we set new standards for our passengers, while reducing the impact on the environment and, not least of all, on the people living near airports.”

Fabrice Bregier, Airbus President and CEO is similarly pleased “On behalf of everyone at Airbus, I congratulate Lufthansa on being the A320neo launch customer… At Airbus we have been proud to support Lufthansa’s growth over the past four decades with our partnership now spanning almost the entire Airbus family, from the A320 right up to the A380.”  Not surprising considering Lufthansa is the largest Airbus customer with 392 aircraft currently in service.

For its first flight, the A320neo took off from the Airbus facilities in Hamburg-Finkenwerder as a special flight with flight number LH9917, and flew with a short stop in Hamburg’s City Airport Fuhlsbüttel towards Frankfurt.  Fitted with a special logo, Lufthansa’s A320neo reads “First to fly A320neo – Less noise. Less fuel. Less CO2“ across the rear fuselage of the Lufthansa aircraft.