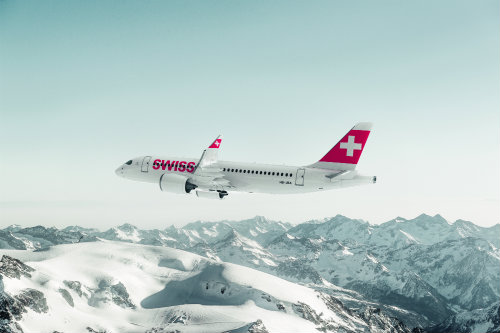 SWISS Airlines new Bombardier C Series 100 aircraft takes off for its first flight this Friday on route from Zurich to Paris.

The twenty new SWISS Bombardier will replace the Avro RJ100’s in the fleet and will be utilised on routes within Europe.  SWISS is the first airline in the world to have ordered these aircraft and the rest of the aviation world will be watching to see how they perform.  Although Air Canada and Delta have also made reasonably large orders (yet to be delivered into service), the long term success of these planes will be determined by this first year in the skies. 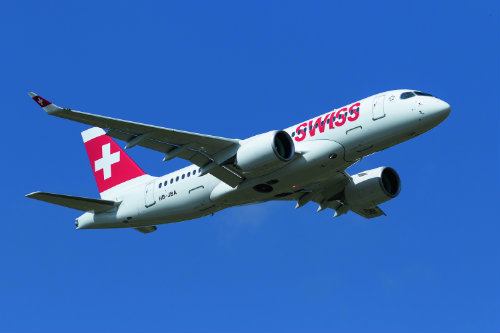 The new aircraft type applies the latest advances in engine, systems and materials technology, and is currently considered to be the most innovative plane available, also bringing a significant increase in comfort for passengers.

SWISS have chosen to have theirs configured into two cabins with sixteen seats in Business Class (2-2 layout) and 109 in Economy (2-3 layout).  Large windows positioned closely allow plenty of natural light into the cabin, and the newly designed overhead compartments both contribute to a feeling of spaciousness on-board.  Entertainment comes in the form of screens above every row of seats showing films and flight info.  Although not as convenient as the personal TV screens we’ve all come to enjoy, most of the flights undertaken will not be more than ninety minutes and this is a usual practice on European domestic routes. 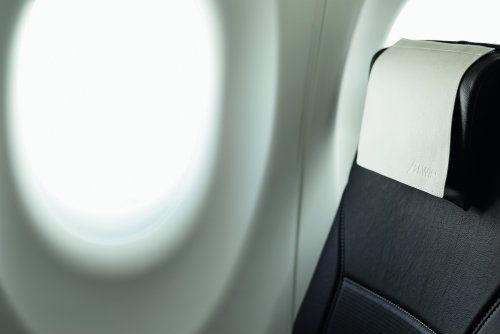 From an engineering perspective the newly developed engines, optimised aerodynamics and lightweight construction have all helped to bring the fuel consumption down by as much as 20% when compared with the Avro, and with it the CO2 emissions as well.  Also, the noise level for passengers has been halved.  Crew areas such as the cockpit and galleys have also been designed with an eye to supporting SWISS crew in their work.  For example, all relevant data can now be projected to pilots at eye level.

Fly the C Series between Zurich and the following destinations – Our consultants can ensure you’re booked on the correct flight numbers if you’re keen to experience the Bombardier C Series aircraft.  Check out our SWISS Airlines Round the World fares below –